It's done.
Kind of uneventful, actually. As it turned out, I spent about 4 hours lying in the pre-op room, waiting for the surgical team. They were running behind; their day started early with a surgery just like mine, but on a young girl who'd had Ptosis (that's the fancy medical term for "droopy eyelid") since birth. Her surgery went long--not sure why--and it pushed the surgeon's entire day out. 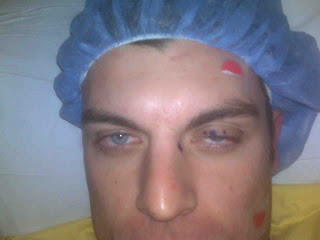 So I arrived at about 10:45, and sat there in this goofy hat, with strange red dots on my face, until about 2:20, when the anesthesiologist finally came in and mixed me up a double dose of his super potent concoction, and sent me off into oblivion.
I came to (well, kinda came to) in the surgical suite. They brought me up-still drugged out, but just not as deep, so that they could have me open and close my eyes; blink and roll my eyes in various directions. That was the strangest feeling-to be awake, knowing that they've got your eye cut wide open, feeling them tug and prod, singe and suture, but not really caring. The truth is they could have amputated my arm, and I think that, in that drugged out state, I would have watched, detached but interested, as they hacked away.
At any rate, the surgery was relatively uneventful; all went well according to the surgeon (although they couldn't isolate the problem that causes this case to be unique, which is cause for some concern). The doctor says that he thinks he has it, but if not, we'll have to go back in within 2 weeks to try to fix it.
Now I look like I've been in a bar fight (sorry; no surprised look yet Katie). The eye is black and blue and swollen beyond belief.
It doesn't hurt terribly, but it DOES hurt. And it's VERY irritating (The swelling and itching; 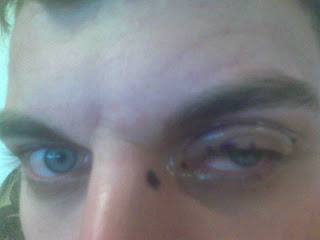 they had to shave my entire chest-HA, no; I'm joking!). But all in all, it's not too bad, except for that I'm tired and I can't see well.
So I'll postpone my baseball post until tomorrow or Saturday. Until then, please don't leave!
Stick around; laugh at the pics of me!
Posted by PJ at 11:23 PM