That you can see pictures of the trip over at Shawna's Facebook page. But I haven't the slightest idea how to get you to her Facebook page.

So if you're already her Facebook pal, you can see the pics...if not, try to find her.

I'm glad; I REALLY missed the kids (we haven't been away from them for that long since...well...since they were born, actually).

But I LOVE Manhattan! I wanna live there. Really, I do!

I have the building picked out, and everything! It's in the Upper East Side, right off of Central Park West...sigh...

Until then, back home in the lovely Central Valley!

Had a fantabulous time, though! A Broadway show (which was incredible); a Statue of Liberty-Ellis Island-Chinatown marathon; Times Square (sensory overload); Cirque du Soleil (Oh. My. Goodness.); $200 in taxi fares (not all at once); and like eleventy-billion blocks walked. 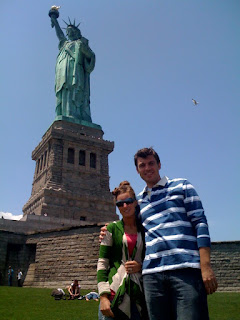 Happy Birthday to my wife, Shawna!

We're spending the day (most of the week actually) in Manhattan, so we
met up with Lady Liberty for a birthday lunch...

The Sweet (Pungent) Smell of Victory!

Today, I am a king! Today, I soar with eagles, a master, a recognized authority. And I am happy.

I received an email today from the Universal Record Database notifying me that I am the new certified URDB record holder for "Most American Quarters in the Nose"!

The email said, in part:

On behalf of the entire Universal Record Database team, I'd like to offer my heartiest congratulations. We think your fitting quarters inside the nose abilities are tremendous.

You realize that this legitimizes what I've always known: I truly am great--the greatest in the world, in fact--at something!

I encourage you to visit my page at the URDB site. It's a shrine of sorts, a virtual museum dedicated to my momentous feat. And it's awe-inspiring (if I must say so myself). When I first visited it, I found myself sitting in quiet contemplation for a few moments, marveling at the awesomeness of this truly incredible feat.

I have to say that I do feel different now that I'm a celebrity. I recognize that I have an obligation to society--to do all I can to end world hunger, to ensure children have books to read, and to help ensure stray dogs are spayed or neutered. And I want to assure you that I won't forget where I came from: I won't allow myself to lose perspective; I want to stay grounded and in touch with my roots. I could never have achieved this without each of you, and I won't forget you.

Thank you once again for your continued support! Never forget: you can do anything you put your mind to! If I can do it, so can you!

A Big Tree in the Backyard

It used to be that when Shawna and I tucked Lex and Gentry into bed, we would pray for them. But the other night, as I was praying, I realized that something had changed. We no longer pray FOR the kids; we pray WITH them.

I still do the whole, "God, protect my babies; give them rest without bad dreams, and place angels at their windows and doors to keep away anything that might hurt them." But then the kids chime in with their additions.

As I listened to their prayers the other night, my eyes began to water, and I thanked God under my breath. Because they get it; their prayers were so trusting, sweet and pure, from the heart of a child directly to the ears of a God whom they know to be a Father.

It was a beautiful thing, this realization that my two incredible kids understand prayer, and talk to God with that simple, untainted, innocent faith that only a child can have. But as they both said, "Amen", I had a lump in my throat, and a heavy heart, because their prayers were all the prayers of one burdened by the calamity of others; none were the lighthearted prayers of a child. They didn't ask for toys or video games; they didn't ask for a vacation or a swimming pool; they didn't ask for a bicycle or even a new sword or doll.

They simply asked that God reach down and care for those they love.

And that's beautiful, but somber.

I swallowed the lump, and with a soft, breaking voice, told each one how much I love them, that they are two of the three most precious people in my life.

And as I hugged them tight, and kissed them both, they each blurted out--almost simultaneously, "Daddy! We forgot something!"

And so we all closed our eyes again, and I listened as they told God that they'd forgot to ask for a house with a big tree in the back yard--big enough for a tree house.

I smiled, and whispered a silent prayer of my own: "God, as you grant each of their requests, please take special care to answer that one." Because if two people ever understood being a Christian, it's the two selfless children who, despite being true kids--ornery, rambunctious and strangely hard of hearing when Mom tells them to clean their room--spend their prayer time talking to God on behalf of those they love instead of themselves.

And if anyone deserves a big tree in the backyard, it's them.
Posted by PJ at 9:16 PM No comments:

A Tale of Utter Ineptitude

My son came home from school and told me that there was a kid on the playground today brandishing a pocket knife, and threatening to "hurt" anyone who refused to give him their lunch.

I was, naturally, alarmed, and rushed back down to the school and requested an audience with the principal. He called me in and asked how he might help.

"Mr. Bateman," I said, "my said came home from school, and told me that another boy was on the playground today brandishing a pocket knife, threatening to hurt anyone who refused to relinquish their lunch."

"Oh my!" the principal exclaimed, jumping from his desk chair. "Which boy was it," he asked my son, as he strode across the room.

"It was Joey," my son said quietly.

The principal picked up a dry erase marker and began to write on a whiteboard hanging on his office wall.

I waited until he moved away, then read:

"The Principal and administration of Horace J. Morgan Elementary School condemn Joey's use of a knife and threats against other students."

The bully has never cared before; he's not likely to care this time just because his name was written on the board.

Our President has demonstrated Chamberlain-like, bury-your-head-in-the-sand diplomacy on this one. And that should worry you.
Posted by PJ at 11:00 AM No comments:

I heard a guy on the radio today say that doing your own taxes is kinda like a do-it-yourself mugging.