This Thursday, I'll become some doctor's art project. I don't think I've ever had surgery before (Mother, is that correct?), but I'm not concerned.

Don't fret folks; it's nothing major. My left eyelid droops. Badly (as you can see in my horrid mug shot). It's to the point now where, quite often, it hinders my vision. 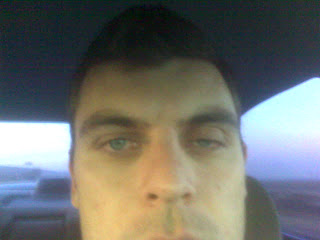 I visited an Ophthalmologist, and after a bit of frustrating doctor shuffling (in keeping with the long-running Baglin tradition of odd and exotic maladies, my eye couldn't have a droop of the typical variety; it droops in a manner never before seen by any of the doctors who pulled and prodded at my poor, sagging eyelid), they've determined that they're going to have to hack the droop out.
So Thursday's the day. I need to find an eye patch now. I don't have to wear one (sunglasses are sufficient, they say), but there's something strangely cool about wearing an eye patch. I've never really been considered an edgy guy; in fact, by and large, I'm a lotion-using, sweater-wearing, violence-hating, alcohol-avoiding, shopping-loving, oft-bathed sissy. And most of my acquaintances know it. So I'm thinking an eye patch will do something for my image (particularly amongst my more "manly" friends).
I wonder, though, if the eye patch will be more effective at "manning" up my appearance, or the nasty black-and-blue eye, with a string of nasty-looking stitches running across to top of my eye?
At any rate, as I said, I'm not particularly concerned. But I WAS surprised. The actual numbers are irrelevant, but I was compelled to ask how much the surgery was going to cost (insurance will pay for the bulk of it, but I still have to pay a small percentage). Suffice it to say that it was quite a bit more than I'd expected (for an outpatient surgery done in a surgery center). And frankly, my portion of the surgery was going to cost more money than I was going to be able to scrape up in the foreseeable future.
I learned, when we were in business for ourselves, and only had a high deductible, major medical insurance policy (and thus paid for most of our medical expenses out of pocket), that if you offer to pay many medical service providers at the time of service, they'll give you a significant discount--even over the insurance price.
So I asked what the cash price would be.
The surgeon's scheduler did some rough calculating on the back of a scrap of paper, and finally quoted me a number that was approximately 20% of the original price. I thought I'd heard her incorrectly, so I asked her to repeat herself. She laughed and said it again. The cash price was an 80% discount (how's that for gazelle thinking, shegazelle?)!
I sat for a moment with a stunned look on my face. She stared back at me with a concerned look on her face. I think she took my silence for disapproval, because she looked down and scribbled some more on her paper.
"What kind of man are you?" she finally asked me.
"What?" I responded. "What do you mean, 'what kind of man'?".
"Well, do you handle pain well?"
"Oh," I said. "Yeah, pretty well. I mean, I'm not one of these guys who won't take pain medication because they need to prove their manhood, but neither do I cry at the mere thought of a splinter either. Why do you ask?"
"Well, if that's still not quite reasonable enough for you," she said, "we can do away with the anesthesiologist, not put you to sleep, and just give you local anesthesia. Do you think you could handle that?"
"Um...I don't know," I said. "Do many people do that?"
"Oh, no," she said. "Nobody does; but it can be done, and it would save you another $1,200."
"Well, would the surgery be painful if I did that?" I asked.
"Oh yes. It's a pretty painful, and very uncomfortable, surgery. I wouldn't recommend anyone not going under for the surgery, but you looked like you wanted to save some more money, and that's the only option."
I laughed.
"Thank you for offering," I said. "But that doesn't really sound like an option. As much as I'd love to save the additional $1,200 (our portion of that would get me a great start on a new MacBook Pro), I'm not THAT kind of man."
She laughed. "I didn't think so," she said.
What did she mean by THAT?
So, I go under the knife this week, having saved myself enough money (on my portion alone) to buy myself a MacBook pro almost twice over. That's amazing, and shegazelle: I certainly hope that you're proud of me!
Do pray for me though, if you will. It seems that my particular brand of droopy eye is just strange enough that they're not completely certain that the surgery is going to do the trick. Apparently, since my droop has good days and bad days (some days it's worse than others), there's some measure of risk associated with the surgery. It seems that there's a possibility that, post-surgery, on days that the pre-surgery droop would have been BAD (like the picture), my eye will look normal; conversely, on days when the droop, pre-surgery, would not have been noticeable, I might not be able to close my eye all the way, and I'll walk around looking perpetually surprised (well, 1/2 surprised, as it'll only be my left eye that I can't close).
One way or the other, should you see some guy around in the next few weeks, strutting about with an eye patch over his left eye, be kind, OK? Let me have my fun!
Posted by PJ at 11:09 PM

What a great discount! And yes of course, kudos to you for asking for a cash discount.
I too will be having my very first surgery soon- next month right after my 27th birthday. Hegazelle thinks I'm a freak cause I'm really excited about taking Vicodin. Since I've never taken anything stronger than Tylenol, I think I might have a great experience with this Vicodin stuff...
Anyway, good luck to you.

Well, I've never had surgery either. Hope I never have to. I am petrified to be put to sleep. I had my wisdom teeth (that were not even through yet, and they had to cut into my jaw to get out) removed wide awake. Now that was NOT FUN! in fact it was EXTREMELY PAINFUL! So I've decide that the 3 I still have remaining (yes I had 7 total) are staying I will not be having them removed. Hope everything goes good! Love Ya

If you REALLY want to man it up you'll just ducttape that droopy eyelid in place. And don't worry about blinking, real men don't use their tearducts anyways.