"There are people who put their dreams in a little box and say, Yes, I've got dreams, of course I've got dreams. Then they put the box away and bring it out once in awhile to look in it, and yep, they're still there."
-Erma Bombeck

Email ThisBlogThis!Share to TwitterShare to FacebookShare to Pinterest
Labels: quotes

A Book You Say?

Someone left me a comment or sent me an email (I forget which) last week about writing a book.

I think I still want to do that (although you probably can't tell it by virtue of the fact that you guys are likely starving to death). I don't know why I haven't been writing. Well I HAVE been writing, just not here, and not anything you'd be interested in. But that's not really fair, is it?

Or do you care?

No matter; from the beginning, it hasn't really been about you. Although I'm glad you came. And it's interesting to see that many of you haven't gone away. This probably sounds like another one of those empty promises, and it may well be (you can never tell they're empty when you make them, can you?), but I certainly am going to try to spend a little more time here.

And I'm not going to roll out all the excuses why I've not been here; come to think of it, there really aren't any good ones, so it'd be pointless to try.

Enough rambling. Just rest assured that I'm not yet dead; I haven't forgotten how to write; my Internet hasn't been cut off; I'm not in prison. I just haven't been writing.

But I'll try not to not write.

Or something.
Posted by PJ at 5:48 PM No comments:

This guy is my hero. Not sure why I find this so awesome; perhaps it's because we're kindred spirits: we both have a bizarre--and utterly useless--yet amazing talent (record breaking, to boot).


At any rate, anyone who can eat a burger that big is amazing in my book! 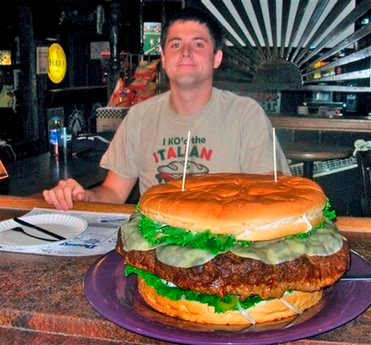 This morning I woke up excited. It's my 13th birthday, and a month ago my Dad promised to take me to a football game when I turned 13. I've wanted to go for as long as I can remember. Most of my friends at school have been before--it makes me feel kind of childish that I haven't, but Mom has always said that it's a horrible sport, and "no place for civilized humans, much less a child." I, of course, respond that I'm not a child; I'm a young man. She glares at me.

But today was my day. Dad had promised, and yesterday when he got home from work, I was sitting at the kitchen table doing homework while Mom cooked dinner.

"I got tickets to tomorrow's game for you and me, Trent," he said. "I'm taking the day off work."

"Jack!" my Mom exclaimed, dropping a wooden spoon into the Spanish rice. "You CANNOT take him there!" There was fire in her gaze.

"Hon, he's going to see it sooner or later. The longer we wait, the more dangerous it is," Dad said, that soothing, calm tone in his voice.

Mom just looked at him for a minute, glaring with that look that would, if directed at me, cause my backside to start reddening spontaneously. Then her shoulders slumped, her head dropped to her chest, and she started crying quietly, shoulders heaving as big alligator tears dripped onto the stove top. Dad went over to her and wrapped her in his arms, stroked her hair, and whispered to her. It made me horribly sad, but strangely euphoric. I'm growing up, and Mom's starting to realize it. I hate hurting her, but it feels good to know that they're seeing that I need to start making my way into adulthood.

When Dad woke this morning, I was dressed and waiting in the living room.

"Thanks. You gonna get ready for the game?" I asked.

"Why don't you eat some cereal while I drink my coffee and shower," he said.

He came over and sat down next to me. "Trent, I know you're excited, but trust me: the game won't start without us, OK?"

I nodded. He smiled at me for a moment. The smile made my chest swell with pride, and my eyes threaten to spill for some odd reason. He shook his head, swallowed, got up and moved back to their bedroom without another word.

We took his truck into the city. Mom wouldn't let us leave until he showed her that our tickets were in the family section of the Coliseum. "If he has to go, he has to go. But he DOESN'T have to sit with those uncivilized cretins." She packed us a light lunch, we loaded up and took off.

The Coliseum was packed out. The feeling was electrifying, hearing the crowd roar, and feeling that electric energy crackle across the stands, fans leaning forward to catch a glimpse of their team as they readied to come out onto the field. My heart was pounding before I sat down; by kickoff, I could barely breathe.

Dad sat quietly next to me, watching me, smiling lightly when I looked over to him.

It was an amazing game; both teams fought hard. The score was tied 13-13 until the last 20 seconds of the game when the opposing team fumbled the ball on the 37 yard line, and our linebacker grabbed it and ran it in for a touchdown.

The crowd exploded! Fans were jumping and screaming. The player who fumbled the ball slumped to the ground, shaking. It looked like he was crying. His teammates stood on the field, stunned and dejected. One guy started screaming, and ran toward the locker room. A guard blocked his way and he fell to the ground, head in hands.

There was a lot of celebrating on the field as the final buzzer sounded; all I could hear was a dull roar in my ears as the stands rumbled with the shouts and pounding feet of overexcited fans.

Then a sudden hush came over the crowd.

"They say the commissioner has no mercy," I heard a guy beside me mutter to a friend.

Then a somber guy in a black suit who looked vaguely familiar was shown on the huge game screen above the stadium. He stood for a moment, glaring out at us as we craned to watch this strange turn of events. The he slowly extended his right arm, fist closed, thumb straight out to the side, and held it almost directly in front of the camera.

The crowd shifted as one, moving to the edge of their seats. Nobody was breathing. I looked up at my Dad; he was staring intently at the screen mouthing something under his breath. It sounded like, "No; please, no."

And as the Commissioner's thumb began it's slow arc downward, I heard my Dad gasp, "Oh God, No!" And then the crowd exploded again.

"What is this, Dad?" I asked, panicking a little.

He looked at me; his eyes were tearing up. "Bud, we're going to stay here because you need to understand something," he said.

"Dad!" I cried out, alarmed. My Dad never cries.

"They're prisoners, Trent," he said. "All of the players are prisoners. They practice for months for this one game. If they win, they're sent back to live the rest of their lives comfortably, their families with them there at the prison. If they lose, then the Commissioner decides their fate."

"What do you mean," I asked, staring down at the field as a slough of guards ushered the jubilant winning team off the field. The losing players were clamoring at the guards, trying to rush past toward the open gates there on the sunken field. Every time a losing player got too near the gate, a guard with a stun gun would zap him and he'd fall to the field, shaking.

Dad was crying openly now. "They're Christians bud. They were thrown into prison for being Christians. And now they're going to open that gate over there," he pointed across the field, "and release lions. And these...these people are going to cheer while those lions attack and maul losing team. Because they got a 'thumbs down' from that evil man up there."

I gaped up, uncomprehending. "I...I...Dad?" I stammered, as I heard the gate clang, and the roar of the crowd intensified. I glanced down as a huge lion bounded out of the open gate, directly at the last victim of the guards stun gun, as he twitched, trying to get his paralyzed arms underneath him. Just as the lion took his final leap, Dad bundled me up, covered my face with his enormous hand, and pulled me out of my seat, toward the exit.

I cried silently all the way home. Dad cried next to me in the drivers seat.

"Why?" I asked. He just looked over at me and shook his head.

Mom was sitting in the kitchen, head in hands when I walked into the house. She watched as I climbed the stairs and went into my room. I climbed into bed and lay, weeping silently, staring at the ceiling. She came in a while later.

She sat on the edge of my bed, hands in her lap, and looked down at me. After a bit, she spoke.

"Trenton. That's why we don't tell anyone where we go on Sunday's; it's why we park around the block, and walk up the alley to get to church. And it's why you're not allowed to talk about church with your friends at school. What we're doing is illegal, and if we're ever caught, that will be your father playing on that field someday, fighting for his life."

She finally leaned down and hugged me.
Posted by PJ at 10:10 PM 2 comments: