What is the American Dream?

I know we toss the term around quite a bit, as if we all know what each other is talking about, but what is it?  Can you verbalize what it really means?

I used to think it had something to do with home-ownership, a somewhat common, albeit narrow, view of our common Dream.  Various researchers over the years have surveyed Americans in an attempt to provide a common definition of the American Dream, and have come up with various concepts, ranging from dreams of abundance to the dream of home-ownership (that I once shared).  Incidentally, this latter dream is come by honestly; in 1774, the Royal Governor of Virginia, Britain's representative in the colony at the time, wrote somewhat sarcastically that Americans were uniquely infatuated with the idea of land-ownership, and even went so far as to say that even if an American had attained Paradise, he would move on if he heard of a better place farther West.

But I've come to realize that land ownership is merely one manifestation of the achievement of our Dream.  It's not the Dream itself; it's a representation of, in one small way, having achieved the Dream.  The Dream is really something more fundamental than merely a quest to own land (a noble quest, incidentally, and rooted in our Constitution; in nations where there exists a more rigid and structured social order, it's often nearly impossible--and sometimes even illegal--for "average" citizens to own land; land ownership is reserved for nobility).

The other day, on my way into the office, I stopped at the gas station, and as I waited at the counter to pay for my fuel, I overheard the owner, a kind middle-aged man with a vague accent, talking with his daughter about her college experience.  I asked her where she went to school (Berkeley--she just graduated) and what she studied (Economics) and if she was done (no; she's going back to Berkeley for an MBA).  I was impressed--and told her as much, to the obvious delight of her proud father.

Her father made a comment about his college experience, so I asked him where he'd studied; Berkeley as well.  Somehow, my quick fuel stop turned into a 15 minute chat, and I learned much about this man who, until that morning, was merely the guy who ran my favorite gas station.

He'd emigrated, with his family, to the U.S. as a teenager, and worked hard (at the perpetual urging of his parents) to go to college.  He landed at Berkeley, graduated, married, and some years later owned (among other things, I suspect) a gas station, convenience store, and a small chain-restaurant franchise--and had an obviously intelligent daughter also studying business at Berkeley.

But somewhere in the middle of the conversation, my new friend showed me exactly what the American Dream means to someone born and raised in a place where such a Dream is not allowed.

"So many people I meet," he told me, "are just looking for the government to help them with this or with that--to give them a job or food or money.  That's not why I came to America.  I came here because I wanted a chance to make something of myself and my family."

I realized that most people who immigrated to our great country did not come with the goal of tapping into our great unemployment programs, or our medicare system, or our social security plans.  In fact, my friend, the gas station owner, was very clear: he'd be insulted if you tried to offer to "help" him through one of these government programs.

For him, the American Dream was about him, and what he could achieve.  It was merely him finding a place where, by definition, he started on equal ground with everyone else; he asked for nothing more than that, and wouldn't accept anything more than that if offered.

It's, perhaps, a subtle distinction, but I don't think our friend, the gas station owner, wants a nation that "compensates" for the things he wasn't born with, or the opportunities he "missed' because he wasn't born into the right family.  In fact, for him, it's a matter of personal pride that he has achieved what he has achieved without any programs to compensate for his relative disadvantage.  All he asked for--and what we gave him--was the same opportunity as anyone else.

I almost cried--literally--as, near the end of our conversation he, with a fierce look on his face, told me, "You know what?  This country is the greatest place on Earth.  This is the land of opportunity; it gave me the opportunity to do everything I've ever dreamed of, and I wouldn't trade it for anything.  I love America."

It's been a long time since I've heard anyone so passionately in love with our country.  And you know, as I listened to him talk about his fierce loyalty to America, it occurred to me that I've met numerous people who interpreted the American Dream as meaning they "deserved" certain things--like a certain level of income, or guaranteed income at retirement, or paid-for healthcare, or income regardless whether they were working.  And none of those who I've known who've seen these things, these programs, as central to the American Dream--none of them have ever told me how much they love America; I've never heard a single one of them tell me passionately how great our country is.

There's a frightening trend in Washington today, and it's not just a Republican or just a Democrat thing.  Virtually every politician running for office somehow weaves into their platform a theme that outlines what they are going to do for us.  It's as if, in order for a politician to get elected, they have to demonstrate that they can give us more, get more for us, expand programs to include more people.

And as a supporting theme, our would-be representatives tell us how they are going to eliminate the unfairness that's keeping us from receiving those things that they want to do for us.  They're going to rectify the fact that wealthy people don't "pay their fair share" in taxes.  Or, as President Obama proposed recently, they are going to pass laws allowing job applicants who aren't hired to sue their would-be employers for discrimination if they believe they weren't hired because they've been unemployed for an extended period.

But there's something wrong with this--and it's not simply whether you believe the wealthy should be taxed more or less, or whether job-seekers should be allowed to sue for discrimination if they aren't hired.  It's our increasing tendency, as Americans (or at least, as a group of politicians who purport to represent Americans) to point to others as the reason we, individually or collectively, haven't achieved prosperity.  It's our collective tendency to depend on our representatives in Washington to "do more" for us to enable us to achieve prosperity.

But that's not our Dream.  Our dream is more noble than that; it's about opportunity unencumbered by the weight of social ceilings or by legal barriers constructed for the purpose of excluding some to the benefit of others.

It is, as historian James Truslow Adams wrote:

"a dream of being able to grow to fullest development as man and woman, unhampered by the barriers which had slowly been erected in the older civilizations, unrepressed by social orders which had developed for the benefit of classes rather than for the simple human being of any and every class."

Why do we, as a nation, insist of cultivating a dependent citizenry?  A nation as great as ours should have, by now, weaned ourselves of our dependency on our government for our income, food, healthcare, transportation and retirement.  Yet it seems as though we've done the opposite; it's as though our representatives in Washington count it a mark of distinction that we have increasingly created a dependent class through our ever-expanding suite of social welfare programs.  A nation as great as ours should birth noble people, driven to achieve personal success despite all obstacles, and as a gift from no one.  Our increasing reliance on our government to provide for us is not a mark of distinction.  It is not great--and gives no one cause to fall in love with our country.

There is little noble in receiving a grant to prosperity; and prosperity granted yields no satisfaction for the recipient.  My Dream, the true American Dream, I think, is of an America that offers me nothing but an opportunity.  I ask for no guarantees and no backup plans.  I simply ask for a right to pursue prosperity, and for the right to call that prosperity mine--and only mine--if I achieve it. 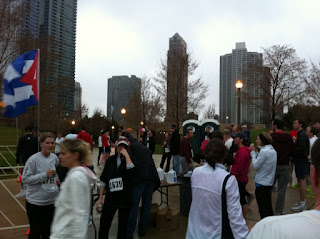 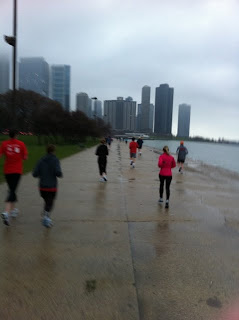 Ran the Frank Landy 5k Fun Run this morning in Chicago. I'm here for a conference and couldn't pass up the opportunity to take a leisurely stroll through the Windy City on a fine Spring Saturday morning.

Actually it was kinda miserable. About 50 degrees, but with a light--very cold--wind, and as you can see in the picture, a heavy drizzle that turned into a light rain at the end of the race.

I had a blast! It was truly a lot of fun! Spent some time with a friend, and beat my best time ever for this distance by over 3 minutes! To be fair, this is the first organized run I've ever done, and there's something about it that pushes you to run just a little faster than you otherwise would.

The Boston Police Department is on it!  Thought this was funny... 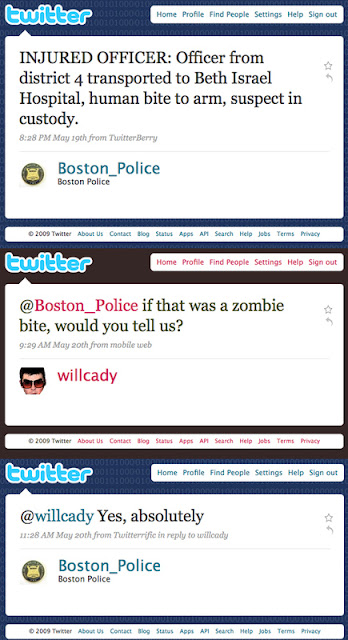 Alexis Had to Build a Mission... 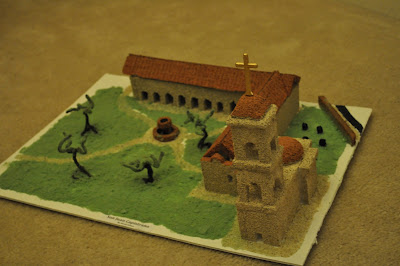 This is what she ended up with... 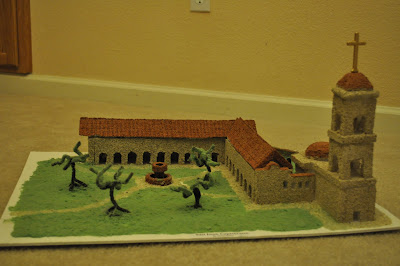 I think it looks pretty incredible! 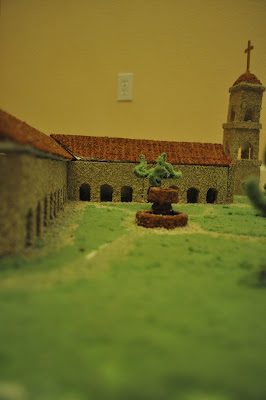 I made a random visit to godaddy.com last week to see whether the status of the myndfood.com domain name had changed (my constant readers will recall that the truly despicable people at acquirethisname.com acquired my domain name a few years ago under less than admirable circumstances).

I was overjoyed to find that the domain had expired, and was up for grabs!  So I bought it--again!  And as quick as that, Myndfood.com is back in business!

I am happier than you can imagine.  Yeah; I'll have to build my readership up again--but I'm not worried about that!  There have to be a few truly strange folks out there who, for some unknown reason, enjoy hearing my admittedly strange perspective on things; you'll find me, I'm sure!