Quote of the Week

The great thing about American government is that even the most fiercely ignorant politician can accomplish the utterly absurd if they put their mind to it.

A story today in the Wall Street Journal points to a sobering reality. According to the WSJ's analysis, lending activity by the banks receiving TARP funds decreased by a total of 4.7%, month over month, between January and February. This sounds a little ominous, but when you factor that out over 12 months (remember, that's a one month decline), you get a decrease in lending activity of 56.4%! That's huge! Essentially, we pumped billions of dollars into a bunch of banks in order to get them moving again. And what did they do? They DECREASED lending activity!

The real question, though, is what does it mean?

First, despite all the bailout money we've pumped into the various banks, they are loaning even LESS money. And that's a problem. Because this house of cards our government is trying so valiantly to prop back up requires the loaning of money (not that I'm an advocate by any means; I'm merely trying to establish the fundamentals of the government's plan). We need to circulate more money in the economy, but people don't have money. So they need to borrow more from banks, which means the banks need to loan more. But the banks are broke, which means we need to give them some money to loan.

Which, after a great deal of analysis, brings us to this question: if we give the broke banks money to loan, and their lending activity DECREASES, what do we do next? The obvious answer is give the banks more money, right?

Wrong. The truth is, we're merely trying to prop up bad businesses. It's true of the auto companies, the banks and the insurers. They're poorly run, inefficient businesses--and the truth is, they can't compete with the rest of the world.

So why in the world would we want to throw more money at them? In the REAL world (the one that you and I live in), high performance is rewarded with returns; poor performance with failure.

Why would it be so terrible if the banks failed? I know: that comment qualifies me as an ignorant buffoon, right? I mean, think of the lost jobs, the lost money, the vacant high rises in New York (and the resultant plummeting NYC Class A rental rates). I'm just narrow-minded and downright ignorant.

Perhaps. But before you pass final judgment, consider this: according to statistics compiled by the Small Business Administration (SBA) over 50% of private sector employees in the U.S. are employed by a small business. Further, small business accounts for over 45% of the TOTAL PAYROLL across the U.S. (including private sector payroll). Even more remarkable is the fact that between 60-80% of all new jobs created over the last decade have been created by small businesses!

Profound numbers--all of them. And they seem to indicate that, first, small business is substantially more impactful on the economy than are these giants that are being bailed out. Additionally, small business is growing in proportion to big business (the lumbering giants are slowly but surely being overtaken by their swifter, more innovative and much smaller counterparts).

And I would contend that that's OK. Why not let these giants fail--and let the small businessmen (who are actually, based on the statistics above, GROWING our economy) keep that tax money, and put it to PRODUCTIVE use in their OWN firms?

Makes perfect sense to me.

But then, what do I know? I'm just an ignorant buffoon.
Posted by PJ at 3:01 PM No comments:

The Cardinals Are Winning 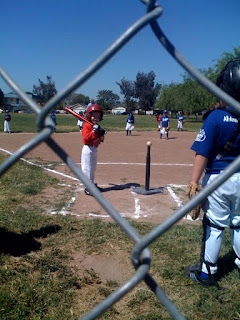 Unless you've been hiding under a rock (or you can't seem to escape the vacuous pull of the Facebook homepage...sheesh) for the past few days, you know about the various Tea Parties that cropped up all over the U.S. on Wednesday. For those who haven't heard, I trust you recall the original Tea Party (in Boston...a few years ago...when Sam Adams and his rabble rousing buddies drunk on the idea of Liberty--and just a little too much of his soon-to-be-trademark ale--unloaded a whole bunch of tea into Boston Harbor in protest against mother England's unfair and burdonsome tax on the stuff). Well, the Wednesday (tax day, not coincidentally) events were in protest of the progressively oppressive tax burden on U.S. citizens, or of the corporate bailouts that Obama and his merry band of aspiring investment bankers keep pumping out (depends on who you ask).

At any rate, basically U.S. taxpayers are fed up--either with the taxes they're being forced to pay, or with the way the money's being used. And in many cases, both.

The Tea Parties were remarkably well-attended (I was travelling, or I would have attended); I think it scared some folks. Including this guy at a site called Mother Jones (which, after a cursory read, seems to provide an extremely one-sided perspective of politics and policy in the U.S.).

But this guy, Ridgeway, wrote a blog post called, "Conservatives Branding Themselves 'Right-Wing Extremists'". It's a long, rambly post, most of which is utter nonsense (which is OK; everyone has a right to be wrong). But his final sentence just irked me. He said:

Do the Tea Party attendees really want to paint themselves with the same brush as guys like this [neo-nazis], just in order to get some victim cred?

That's not really what got me though. He's trying valiantly to liken Tea Party participants to neo-nazis! What?!? I missed something somewhere. I didn't see the news stories where Tea Party participants were yelling hate-filled racial epithets, burning ethnic effigies, or taking baseball bats to the legs of their opponents. Did you? How in the name of all that is rational can you even begin to compare the Tea Party protesters with neo-nazis?

I know, I know: he's TRYING to make the point that CONSERVATIVES are painting THEMSELVES in that light, but that's just utter balderdash. Maybe SOME conservatives are trying to capitalize on the success of the parties, but the truth of the matter is, this wasn't really a conservative movement--any more than the original Tea Party was a conservative movement. Both were about Liberty--plain and simple. The overwhelming message is not that "we are victims." It's, "you, our elected representatives--from BOTH parties--have done a deplorable job in carrying out your elective responsibilities. We, therefore, put you on notice: change things, or we will."

You tell me: does that sound like the talk of a victim? I think not. Rather, it's the sound of a patriot! A true American, stepping forward and standing up for that Liberty and Freedom that our founding fathers, with incredible foresight, established in the Declaration of Independence and the Constitution.

It's working folks! Feels like revolution to me!
Posted by PJ at 5:17 PM No comments:

In the news today, Billy Bob Thornton's band, the Boxmasters, canceled the rest of their Canadian tour after being booed and criticized by angry Canadian fans after his recent radio interview.

Billy Bob Thornton Is A Jerk

Don't believe me? Watch this video. I'm not a fan of his fusion of "British Invasion meets hillbilly" music, so I wouldn't listen to his music if the Boxmakers were the last band on earth, but I'm not even going to check them out now. And I'm certainly not going to watch any Billy Bob movies.

The guy is a creep.

You'll have to watch the video to know what I mean, but it's absurd to think that some new band in some alt-indie genre has made it big in only a year based solely on the quality and appeal of their music--particularly if their front man is an Academy award winning movie star.

The ONLY reason they've sold enough albums to even buy groceries is because they've got Thornton up front. And for him to so arrogantly insist that their musical success has nothing to do with his movie career and, further, that his interviewer NOT EVEN MENTION HIS MOVIE CAREER is head-in-the-clouds idiocy.

He needs to be brought back down to earth.

Watch it and see if you agree...