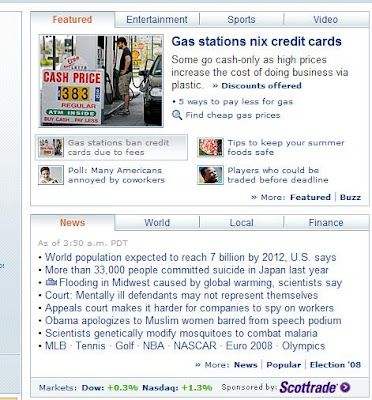 I was working late (too late, I think), and before signing off to get in bed, jumped over to the web to check the news headlines.
I wish I hadn't.
Today's top news stories? Gas prices are so high that stations can no longer afford to take credit cards; global warming is causing flooding in the Midwest; mentally ill defendants may not defend themselves; scientists think they've created a "super" mosquito that can combat malaria; Muslim women barred from speaking in a public venue; in four years, the world population will have exploded to 7 billion people; 33,000 people committed suicide in Japan last year.

That's what shows up at the top of the list. Even the positive stuff--like the malaria-fighting mosquito--is thinly veiled bad news; namely that there's a world plague that we're actively fighting. There's nothing positive there. In fact, reading the news in it's entirety anymore is enough to make anyone naturally inclined to pessimism (as I am) sit back and wait for utter destruction, for the Apocalypse to overtake us (it's bound, after all, to happen at any moment).

It's truly depressing that all we can find to talk about in our world today is this. Either the world has rapidly become a terrible place to live, or the news agencies have taken to peddling utter hopelessness (as I say that, I get this feeling in my gut that it's one of those things that one begins to say as they age; you know, one of the statements that typically begin with "back in MY day...", in which case, I'm HORRIBLY depressed because it means I'm FAR older than my already depressingly horrid age).

At any rate, allow me, for a moment, to embrace my inner senior citizen, and say, "In MY day, they had POSITIVE news every once in a while." But then, I'm reminded hundreds of times EVERY day that today is NOT my day. Tomorrow probably won't be either. So, let the news be what it'll be.

My sentiments exactly! I don't read it either. Great post.