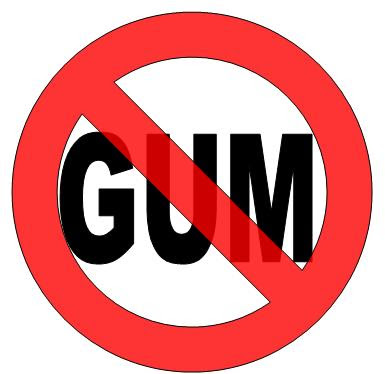 Read about it here.

Case closed. You tell PJ that he's hot and he'll dedicate a blog to you.
(hee hee)

Tell me PJ, is there another meaning to this GUM thing. Or are you talking about chewing gum.
John W.

PJ, I read an earlier post of yours in which I recall a comment by “Blake” concerning your behavioral exhibits, I think “Jerk” was the word of choice. I also noticed the comment “Blake” made of your image portrayed, “Hot” was the next word of choice by this very mysterious, almost fictionist comical character. I cannot agree with his comments of your portrayed image, but I can tell you that you can possibly become less of a “Jerk” if you convert your ways and recognize the great benefits of gum chewing!
The U.S. Armed Forces have regularly supplied soldiers with chewing gum since World War I because it helped both to improve the soldiers' concentration and to relieve stress. Recent studies show chewing gum can also improve one's mood. As of 2005, the US military is sponsoring development of a chewing gum formulation with an antibacterial agent, which should be able to replace conventional oral hygiene methods in the battlefield.
Recently the U.S. Armed Forces have been providing soldiers with caffeineated gum to keep soldiers alert for extended periods of time without experiencing fatigue or drowsiness. Each stick of gum has approximately 100 mg of caffeine in it, which is about the same amount as in an average cup of coffee.

I would be willing to contend your view on gum with a friendly campaign type battle on your Blog. You write 150 words or less on why you think gum is so repulsive; in the same post attach my 150 words or less as to why I believe gum chewing is an intellectually stimulating activity, and then let the voters decide. Use a 3 day poll to determine the outcome of our combined 300 words of masterful persuasive speechifying.

Two things: first, I don't know that the point can be effectively made in a mere 150 words.

Second, the deck is stacked against me on this one in that my position is an obvious minority position. Thus you'll, by default, have a whole following, whereas I'll have virtually nobody, at the outset, that agrees with me.

So, it'll, in effect, be you coasting with virtually 100 of the audience, and me fighting to take enough followers from you to win.

In short, I've got an uphill climb; you, on the other hand, only have to maintain.