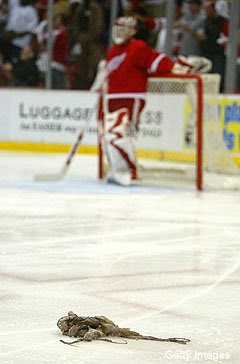 We avid hockey fans wait, with bated breath, for the opening moments of Game 1 of the Stanley Cup Finals between the Pittsburgh Penguins and the Detroit Red Wings Saturday evening.

I am, as you, I'm sure, know, a die hard hockey fan. And I particularly love the Red Wings. We Greens are dignified folk, well-rounded and cultured. And what self-respecting, refined and enlightened individual wouldn't find themselves drawn to a sporting team whose long-standing tradition it is to hurl octopi out onto their playing surface?

It is, to be sure, an exhilarating feeling to watch the flubbery creature go sailing over the head of the goaltender, and plop out in the center of the ice, gliding along for a moment before coming to a stop out amongst the players, tentacles splayed out every which-a-way, and almost immediately frozen to the ice. If you've never seen it, you should watch it.

But mere weeks ago, the NHL commissioner, who apparently have very little substantive work to do, imposed a ban on octopi twirling, instituting a $10,000 for any individual caught slinging the slippery cephalopods. Why? That's the question that we enraged Red Wing fans have been asking. Why, Commissioner Bettman?

This week, he answered:

"Actually, there's a very good reason for it. We haven't fined or given a delay of game penalty for the throwing of the octopus because we understand and respect the tradition. Having said that, when you swing the octopus around - and I don't know the exact term for it -- but octopus 'gunk' gets on the ice and occasionally has gotten on the players -- the goaltenders -- as it goes by. Occasionally, when it freezes on the ice, it creates a potentially hazardous situation for the players. It's not about interfering with a tradition; it's about making sure nobody gets it in their eyes, like a nearby goaltender, or that nobody blows out a knee getting caught on some frozen gunk."

Ah! It's because the octopus "gunk" gets on the players, and might injure them.

This, may I remind you, is the game in which players routinely lose teeth; in which blood doesn't seep from the body; it doesn't drip from the body; it SPRAYS and SPURTS from the body. The game of broken bones and damaged eyes. What damage, pray tell, is a bit of octopus "gunk" going to do to these guys' blood stained uniforms? And how many injuries are going to be caused by a flying octopi tentacles to men who've been struck countless times by hockey sticks and flying pucks?

I have my doubts. Nevertheless, I'll abide by the rule, I suppose. Because the last thing I need is a 10K fine for launching a slimy, "gunky" octopi out onto some ice.

This guy Bettman the "Over-Legislator should be a California Sate Senator; he'd fit right in.
Posted by PJ at 12:31 AM

Is the flying octopus dead at the time of flight? Just wondering.