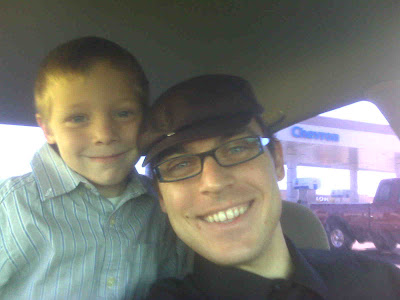 Gentry's six today. It's hard to believe, isn't it? It's the same thing that every dad blogger writes about on his son's birthday, but it doesn't seem possible that it was six years ago that I was changing his first diaper (yes, I did change diapers); that I was getting up at 2:30 AM to heat a bottle; that I did that bouncy-on-the-shoulder-while-patting-his-back-and-humming thing to calm his upset stomach and stop him from crying.

It doesn't seem possible that that same little guy is the guy who likes to fish (he cast's better than me); who loves school (he's an incredibly diligent and focused student); and who grasps, at six years old, the impact of even complex political issues. 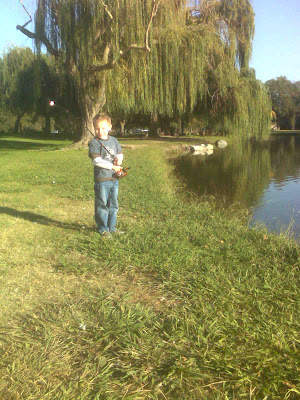 I was taking him to school on election day, and observant kid that he is, he called out as we turned a corner, "Dad! Those two guhls awe holding "Yes on 8" signs!".

"I know what that means, Dad," he said after a moment.

"It's whewe we say that a mawwiage is only with one man and one woman."

I almost cried. "Yep, Bubs. That's exactly what it means."

I felt the lump starting to form in my chest. I could barely squeeze out the words: "What's that mean, Bubs?"

"It means that mawwiage could be a man and a man ow a lady and a lady. But God doesn't like that, so weow voting fow 'Yes on 8', wight Dad?"

I almost cried. I can barely stand to be away from them for more than a few hours any more. It seems like they're both developing so fast that I'll likely miss something monumental while gone to work. There isn't a day that goes by that I don't have at least one moment where I sit, heart full, just amazed at some new territory that they've discovered.

I love being a parent.

Thanks for allowing me to wax sappy and nostalgic; I'll try not to do it too often!

In the meantime, join me in wishing the most incredible son in the world a very happy sixth birthday!

Happy Birthday Gentry!!! I guess that explains the trip to "PUMP IT UP" today instead of attenting WCC! Enjoy!!!

To our ADORABLE nephew... and cousin...
Happy Birthday Gentry!!!
We love and Miss you!!!
Love ya